Do you know the definition of the 4th industrial revolution?

Often when I talk with other leaders, even in the tech world, there is an outspoken lack of clarity about what the definition of the fourth industrial revolution really is. Isn’t is just more of the third revolution with automatization and digitization? It is not.

Maybe not a definition, though a very good introduction is found in the book “The fourth Industrial Revolution” written by Klaus Schwab, the founder and Executive Chairman of the World Economic Forum (WEF). This book takes you through the technological changes, the future that is unfolding and how we must take collective responsibility to ensure that the future is a positive one for all of us. With inspiration from Klaus Schwab, I will here clarify and give a go at defining the fourth industrial revolution – I would love you to add your knowledge, references, inputs, comments…so please respond in the comments

Definition of The Fourth Industrial Revolution

Is the profound and systemic changes in our society, made possible by convergence of the maturation of new technologies and the exponential growth in computational power, digitization, digitalization and digital interconnectedness.

The word revolution means abrupt and radical change and the world has changed significantly before. What is different this time is the speed of change.

In the third industrial revolution, the core was digital technologies that have computer hardware, software and network. It led to increased automatization, digitization, digitalization (see Appendix 1) – and this revolution is still ongoing.

The fourth industrial revolution builds on the 3rd but differentiates from it by: 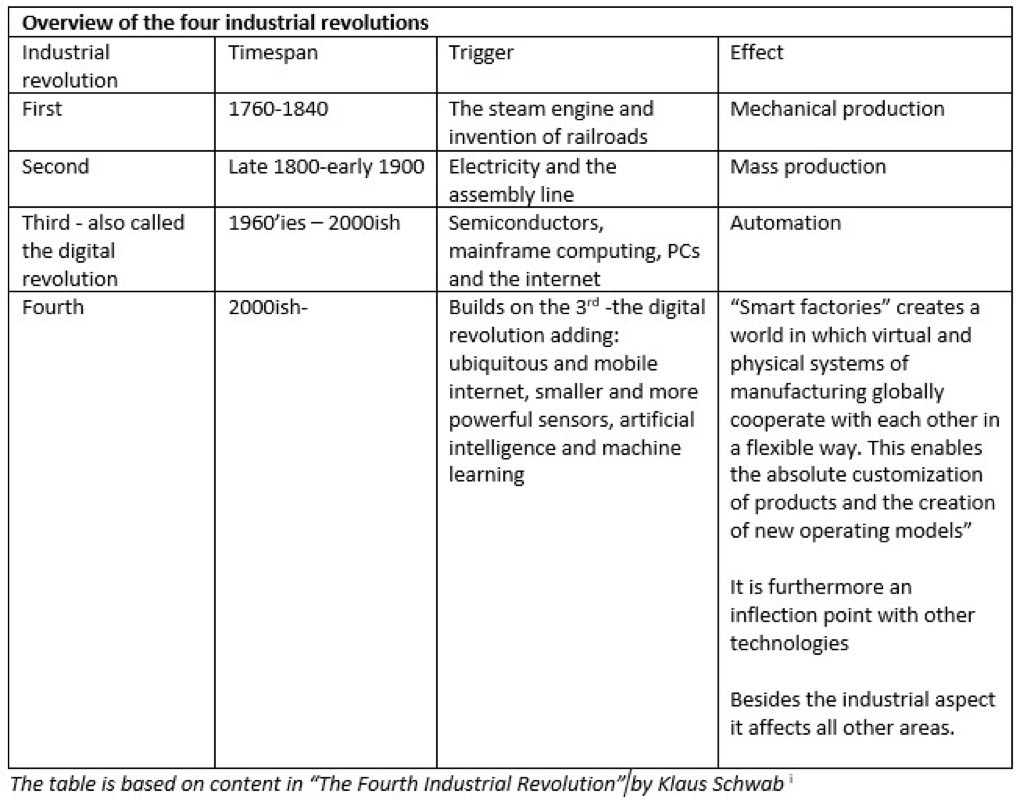 The term industrial revolution is no longer an adequate term as the fourth industrial revolution goes far beyond the industrial sector. We see the new technological developments, new products or new business models, and it is easy to get excited about the technological possibilities. However, the systemic change of our society is an underlying disrupting change of major impact. It will impact everything. It will transform supply chains, production, education, healthcare, transportation, entertainment, regulation, energy supply, water supply, health, learning… It will change way we work, how much we work, how we learn and thrive, how we consider countries or global companies. Its profound changes will change our perspective of what it means to live, be successful and be in this world. It is truly a revolution – a paradigm shift that is underway.

It is important to remember that the world is not at an even level in terms of which industrial revolution that has been implemented. Today one cannot talk about which countries are at which level, as a country may have universities and companies working at the forefront of a technology in the fourth industrial revolution, while a large part of the country has not completed the second where electricity is available to everyone, or the 3rd where everyone have access to internet.

The technologies in the fourth industrial revolution

I participated in the Singularity University Global Summit in San Francisco in August 2016. I am a technical literate and already knowledgeably about many of the technologies, yet I was seriously surprised and mentally expanded after two days of examples of what the technologies can do and the speed with which they develop. It is breathtaking, when one understands what the potential and impact and scalability some of these solutions have. Very encouragingly, most of the developments was started from a deep desire to improve life of human beings. 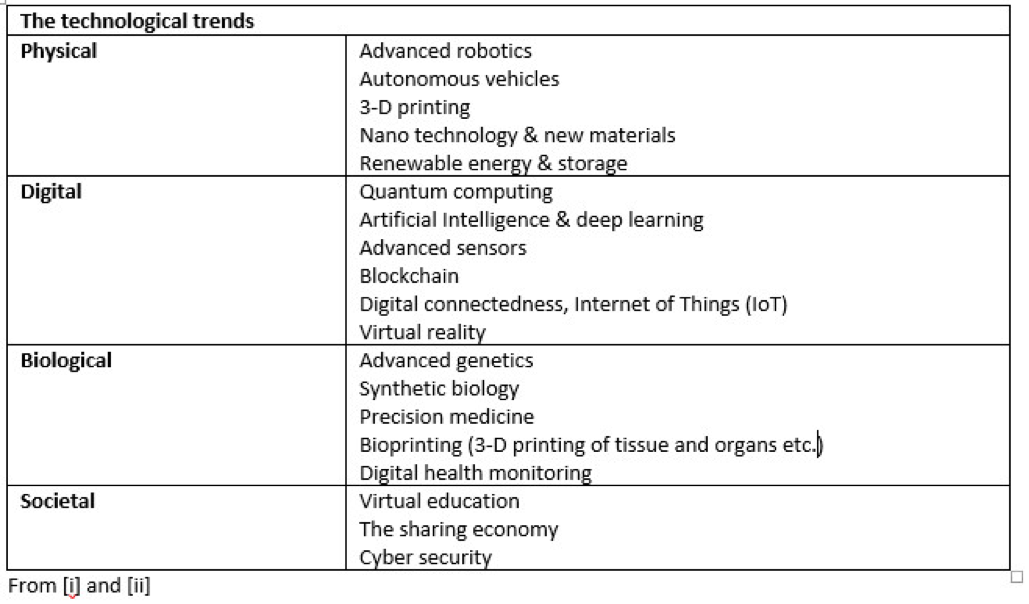 Change is the only constant in life. We all need to change with the new era. This change is however of a magnitude and a speed that demands that we think in more holistic perspectives and have much more focus on the life of human beings as well as the foundation for life – the planet, when we develop society and our businesses.

This leave us with a huge demand of courageous leaders, who are ambitious on behalf of the common good, leaders who take responsibility for shaping the future, and leaders who can lead in a constantly changing world of possibilities.

Humans follow the strong narratives that reach your feelings, heart and soul. Facts are extremely important, but they need to be supplemented with a strong emotional narrative before they really stick with us. The boldest example in newer time is how Americans have followed the narrative of the new American President – a narrative borne out of emotions of fear and lack and fueled with strong emotions towards chosen people or causes – regardless of facts.

We must develop strong positive narratives for development of our future. Strong narratives, that do not disregard the downsides while still painting an involving and emotionally desirable picture of the future way of living and working. Our lives will be very transformed and many things we consider fundamental, important and prestigious today will disappear and new norms will develop. Companies too play a crucial role in giving strong narratives for their contribution to the society – the purpose of the company.

With the exponential development of computing power more and more things are prone to become digital. The words used in this context are often used interchangeably, but Brennen and Kreiss argues that is analytical value in explicitly making a clear distinction[iii]:

Digitization refers to the action or process of digitizing; the conversion of analog information (eg. signals, images, sounds and objects) into digital form (i.e. numeric, binary format).  The majority of sectors and industries in media, banking and finance, telecoms, medtech and health care have been strongly affected by this conversion of information.

Digitalization, by contrast, refers to “the adoption or increase in use of digital or computer technology by an organization, industry, country, etc.”. It is the actual ‘process’ of the technologically-induced change within these industries. This process has enabled much of the phenomena today known as the Internet of Things, Industrial Internet, Industry 4.0, Big data, machine to machine communication, blockchain, cryptocurrencies etc. 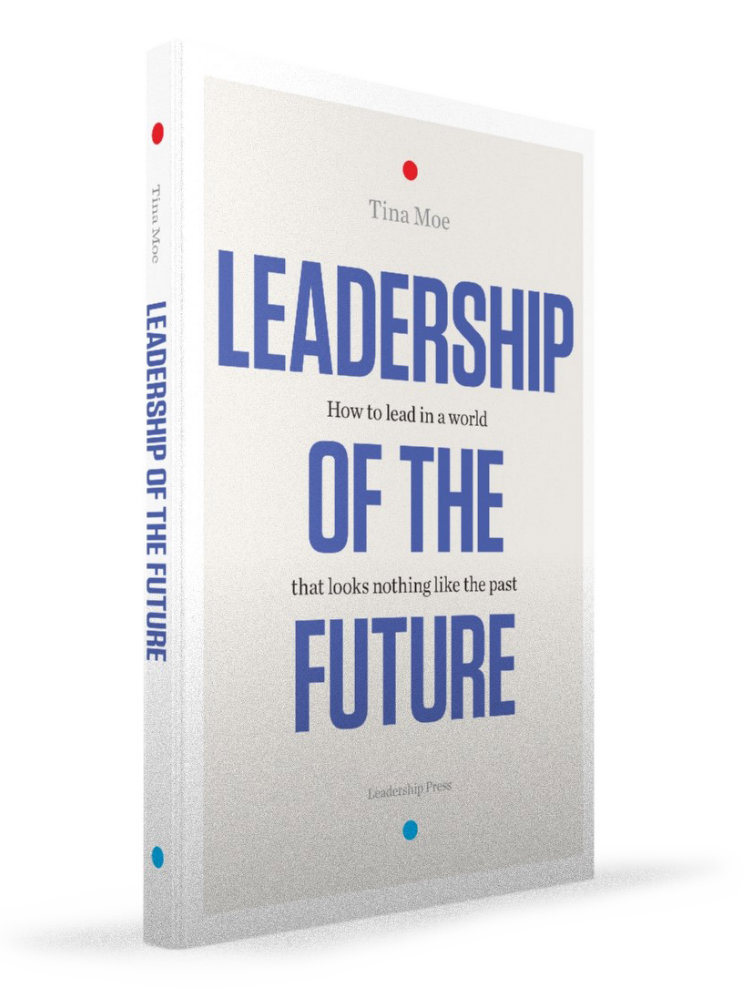 Begå flere fejl, skab mere energi og stop det ensidige fokus på bundlinjen. Sådan lyder hovedbudskabet i min nye bog ”Leadership of the Future – how to lead in a world that looks nothing like the past” om grundkernen i fremtidens ledelse.